Luther for the Rest of Us

5 years ago, I wasn’t dressed in a Halloween costume. My German host family found the idea of Halloween preposterous, particularly as it fell on Reformation Day. So instead of going door to door asking for candy from neighbors, I spent the evening attending a quiet, somber service at our small German town’s Lutheran church.

I had a difficult transition to life in Germany. An exchange student who left the US thinking he knew everything, I was bombarded by my inability to speak German and the personal guilt and shame I felt at not being able to connect with my gracious hosts. I felt alone in my failure, alone in what seemed the endlessly confusing ritual of everyday whose motions I understood but whose content escaped me.

And my transition was made more difficult because I also felt estranged from my family in the US. Secrets had come out shortly before I left. None of us knew how to move forward, and each of us did so largely on our own.

So when my host brother and father invited me to attend a Reformation Day service that evening, it seemed like the least worst alternative to sitting at home and trying but failing to speak or understand German. If I sat in a pew, no one needed to know I didn’t know German.

When Luther declared that the Roman church of his day could not be the final arbiter of grace and salvation for Christians, he struck at the core of the church’s claim to be the primary authority of judgment, in this life and beyond. For Luther, Scripture and faith alone were the means by which Christians made sense of their lives before God. And Tillich’s radical appropriation of Luther’s argument—that grace alone is the force that accepts us unconditionally—was pitched at a post-World War II audience who, in Tillich’s own words from the Preface to his collection of sermons, “came from outside the Christian circle in the most radical sense of the phrase. For them, the sermon in traditional Biblical terms would have no meaning. Therefore, I was obliged to seek a language which expresses in other terms the human experience to which the Biblical and ecclesiastical terminology point” (The Shaking of the Foundations).

This unconditional acceptance was what I experienced in that small German church 15 years ago. It enfolded me in the warm, unconditional acceptance of my hosts. It sparkled like the candles. And it whispered its message in a language I would come to love yet never master, through hymn tunes and call-and-response I oddly understand yet scarcely comprehended.

To all fellow Christian institutions who remember Luther’s legacy today: since you yourselves are not the ultimate arbiters of God’s grace and healing, how are you hosting others in ways that might communicate God’s grace and healing? How are you using your institutions—churches, seminaries, businesses—to point toward God rather than yourselves? How are you translating the religious inheritance you’ve received so that all creation might know it is accepted? And how are you listening for the Spirit that you scarcely comprehend in the voices of creation outside your walls?

United looks forward to living into these questions with everyone for the next 500 years. 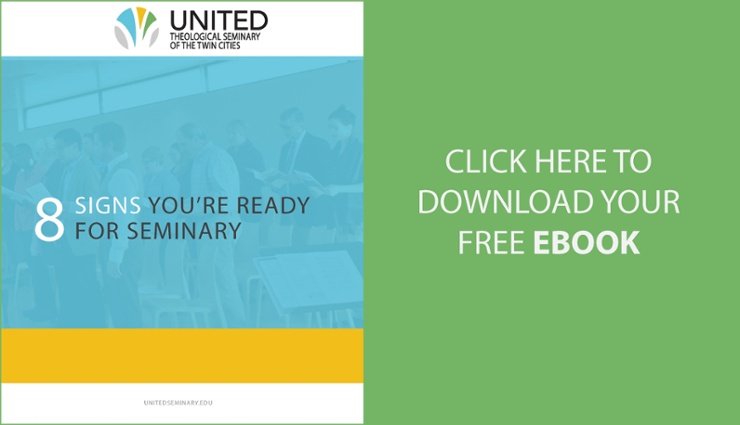 Phil Romine is a 2016 M.Div. graduate of United Theological Seminary of the Twin Cities and currently serves as the Director of Admissions.

Clyde Steckel to Speak on New Book: Finding the Church | A Personal Memoir

"We cannot allow ourselves to become numb to the injustices of our society": President Lew Zeidner's MLK Day Address.