On June 1 of this year, United welcomed Dr. Tim Senapatiratne as Director of the Spencer Library and Associate Professor of Theological Bibliography. Tim comes to United after 15 years at Bethel University where he was Senior Reference and Instruction Librarian. Tim has also been teaching a research course for United’s Doctor of Ministry students for about six years now, but he is excited to have a more prominent role at United. 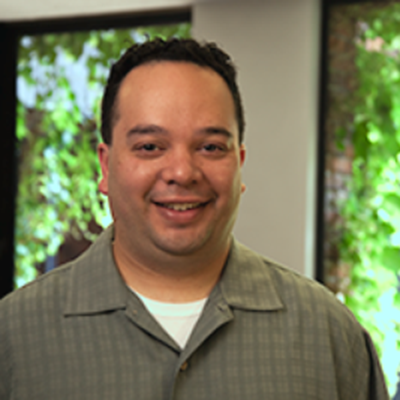 “I am probably most excited about becoming part of and engaging with the community,” says Tim about United. “The United community has already been so much fun. There are so many wonderful people, so many interesting stories. The work that people are doing, students and the faculty and staff, is life giving! I had a conversation with an alum a couple of days ago about a library thing and it was so much fun hearing this particular person’s stories about their time at United.”

Tim’s approach to being a librarian is rooted in his love for teaching. Indeed, being a librarian wasn’t Tim's original path. “My career plan was always to be a teacher or instructor in Biblical Studies. I kind of figured out that’s what I wanted to do when I was in undergrad. So then I did a Master’s Degree and worked on a Ph.D. in Biblical Studies at Marquette University.”

But during the economic crisis of 2008, Tim had to change his plans as many of the schools where he was applying for jobs suspending their positions in Biblical Studies. The decision to start what turned out to be long career as a librarian began with a bit of a surprise.

Tim says, “I sort of accidentally got a job at the Bethel library--I thought I was applying for something else. Halfway through the interview I realized, ‘Oh, this is for the library!’” As it turned out, the work of a librarian was a perfect fit. “I fell in love with being a librarian in an academic environment. Those two things fit together for me. I continued to teach as an adjunct but really worked on becoming a good librarian. I ended up earning a library science degree as well.”

Over the years, Tim has seen first-hand the importance of library research for seminarians. He says, “Research rarely ever proves anything; it’s more about disproving bad ideas. In theology especially we can all see examples of bad theology every day--theologies that are oppressive and hurtful and marginalizing. Research is how we become aware of the broader conversations, both historical and contemporary, and try to understand how we as individuals fit into those conversations. Research helps us become aware of the human story, hopefully keep us from making mistakes, and guides us into new ways of thinking and experiencing the world.”

“The role of the library is about access,” explains Tim. “A library helps students and faculty get access to the materials they need. It’s not about ownership or having the most books on the shelf. It's about being able to point students to resources. This has become so evident during the pandemic. We have a lot of good books on the shelf at the library, but unfortunately we can't use them right now. So how do we create access to other kinds of materials to help with research and contextual understanding?”

At United, this means students have access to a broad range of resources across traditions and denominations. As both a librarian and a professor, Tim challenges students to look comparatively across scriptural traditions and is a strong advocate for interreligious scholarship.

I think of Biblical Studies as a broader discipline of textual studies," says Tim. "So we have biblical materials--Hebrew Bible and Christian New Testament material--but we have others texts as well. We have Buddhist texts, we have the Quran, we have all kinds of different texts. What’s fascinating to me is that in a sense those texts are libraries themselves. They contain within them huge traditions. It’s been my experience--and I include myself in this--that we often fail to understand the depths and beauty and wonder of these texts because we have been prejudiced by things other than the texts themselves.”

Tim sees in theological education a need to challenge those prejudices. He says, “A few years ago there was a publisher who was publishing commentaries on the Christian Bible—I say that because I can’t remember which books of the Bible that was about, but I think mostly New Testament—but they were written by people who were not Christian. That’s the kind of conversations we should be having. Those are the kinds of conversations that bring life to the text. So that is the sort of thing that gets me really excited.”

Part of the appeal of United for Tim is the strong culture of questioning—questioning the notion that one tradition has all the answers, curiosity in the face of new concepts, and freedom to explore any train of thought. He says, “As individuals, if we stop asking questions, in a lot of ways we stop living. Otherwise it seems as if we have figured it all out and at that point we are just coasting. So I hope I am always asking questions and hopefully some of those questions are dangerous and provocative. You don’t know what the answer will be until you ask.”

This enthusiasm for critical thought is at the heart of Tim’s role at United. When asked about advice he has for current and prospective students, Tim responds, “Ask questions! Ask for help. Often, we wait until we are really frustrated before we actually ask for help. Oftentimes if we ask just a little bit earlier in the process we can save ourselves a lot of time. I think that's one of the roles I can really help with--saving students time at the beginning of their research. I hope students will ask questions, lots of questions. That's how we learn.”

A Call for Lament (in the time of a global pandemic)