Witnessing the Power of Community: Claire Klein on the Poor People's Campaign.

“Can you tell me about your theology of protest?” Rev. Ashley Harness, my minister at Lyndale United Church of Christ asked Rev. Dr. William Barber at a planning meeting for the revival of the Poor People’s Campaign.

He took a deep breath and responded, “I follow a convicted felon who was arrested and incarcerated because he stood for the poor and oppressed. If I claim him as my Lord and he asks us to take up his cross, I have to follow him this way.”1

In 1967, a year before he was assassinated Rev. Dr. Martin Luther King, Jr. refocused his civil rights campaign to be about economic justice and human rights.2 Today the term “intersectionality” often gets used to describe how various issues affect the other. Dr. King understood that eradicating poverty for all races would mean a better life for everyone. He also understood that it would take the transformation of society to succeed. His plan included a new march on Washington, demonstrations, and national nonviolent civil disobedience.

The revival of this campaign uplifted the original pillars Dr. King cited – economic justice, racial justice, and demilitarization as well as adding environmental justice. The 2018 Poor People’s Campaign (PPC) was kicked off on Mother’s Day and lasted for 40 days. Each week focused on a different theme and employed many of the same tactics as the original actions. Each of the 29 states participating in PPC partnered with organizations already doing this work including religious communities and nonprofit justice organizations. 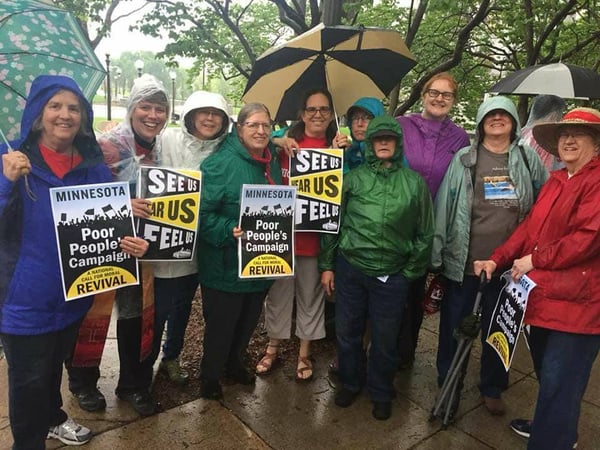 While I had learned about Rev. Dr. King in school, there is obviously much left out of our textbooks. In preparation for this revival, my church held weekly education classes and discussions, preached about this work, and attended trainings held by the PPC. It was here that I was able to grapple with what my participation in the actions might be and listen for what my call might be.

As a final project in a class on Jesus led by Dr. Demian Wheeler at United, I wrote about the possible historic and political actions of this man I have chosen to follow. With Rev. Barber’s words ringing in my ears, I felt pushed to step out from the sidelines and easy “Facebook activism” to be more actively involved.

When I arrived at the trainings, it was encouraging to see United graduates and professors sitting beside me. Their presence helped me commit to attending the rallies at the state capitol. As we posted accusations of “Murderer” and “Rapists” on the statue of Christopher Columbus on the capitol mall, I felt the support of my pastors, Pastor Ashley and Rev. Dr. Rebecca Voelkel. As cars ripped through lines of those willing to be arrested in front of the Whipple Building, blocking access to ICE trials, I sang and chanted with my professors from United Seminary and other members of my church. 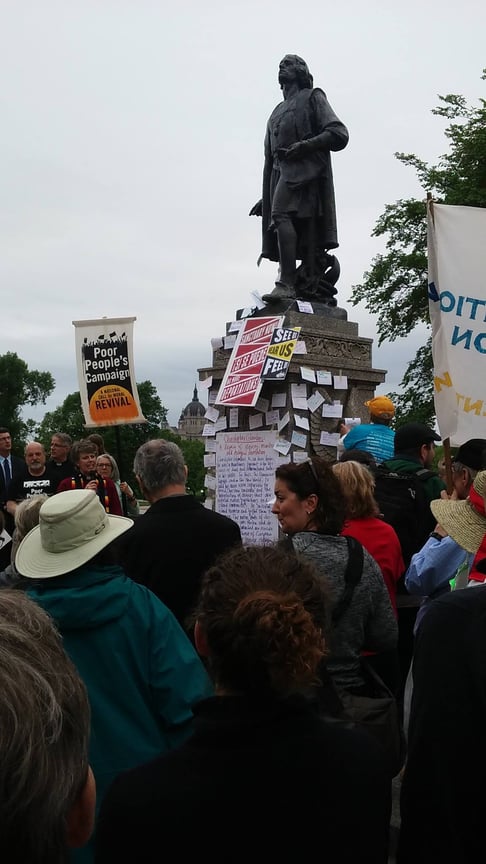 Through this experience, I witnessed the power of community. I was transformed by the willingness of those to “take up their cross” and follow the example of Jesus. For, indeed, none are free until all are free.

Claire Klein is a current MDiv student with a concentration in Interreligious Chaplaincy. Claire is a certified music therapist and a member of Lyndale United Church of Christ.