Religious Plurality: Interacting With and Supporting Others With Differing Religious Convictions 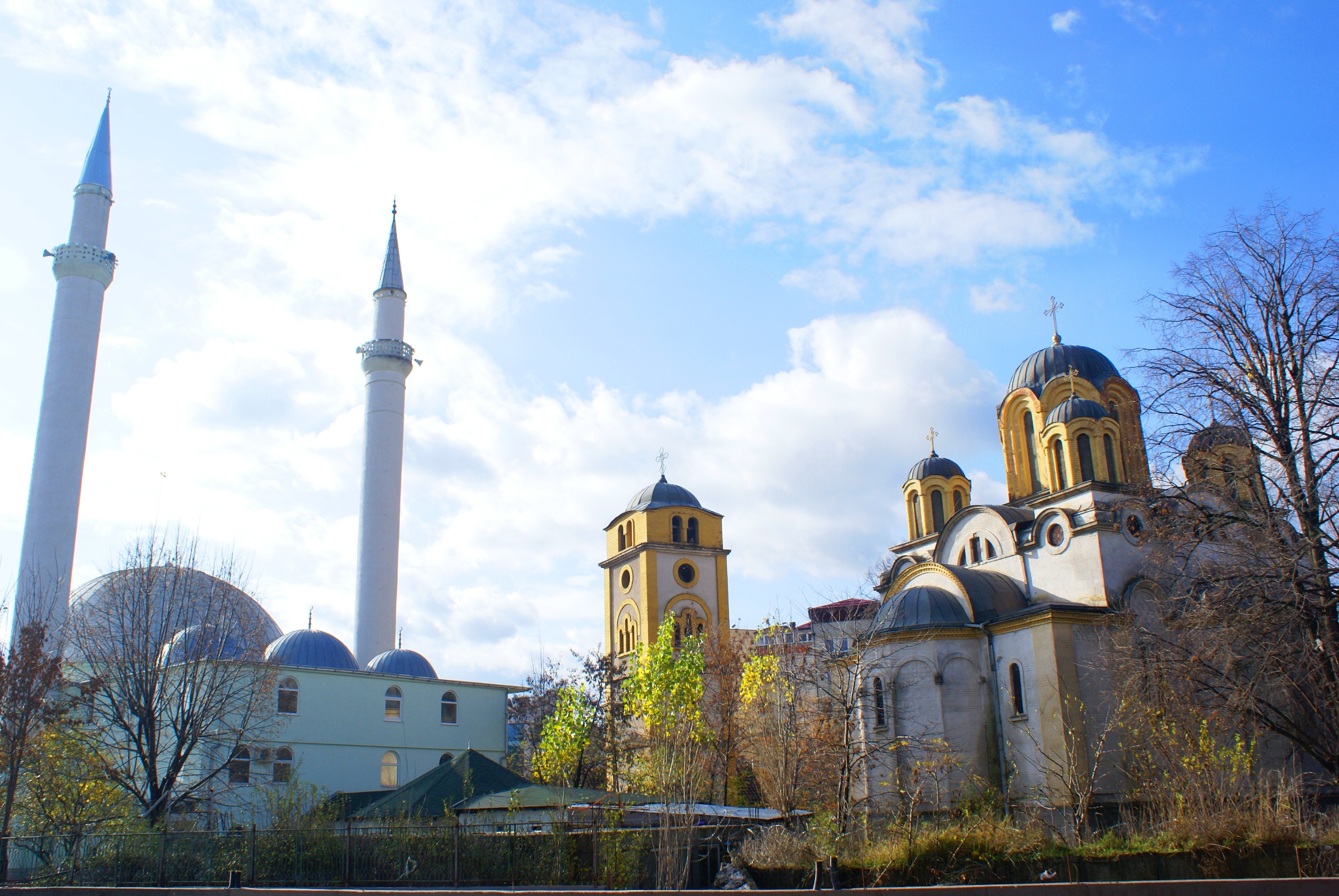 This week's blog post is based on a sermon given by student Dennis Peters as a part of United's summer worship series.

What exactly is “religious plurality"? We’re talking about the relationships between religions. Is it tolerance? For instance, your neighbor is a different religion from you. Say she is a Reform Jew, and you’re a Methodist... or a Congregationalist... or a Presbyterian. Even though you know your religion is far superior to hers, you act nice with her, have friendly conversations, loan her your lawn mower, borrow her mixer. Okay, wait. So far, all you’ve done is condescend to talk with her. Knowing your religion is superior to hers.

Yeah, that’s not what it’s about. Religious plurality goes several steps further. Religious plurality means operating on the assumption that each of us has our own spiritual path – our own valid spiritual path. If I believe that being born again in Christ is the only way, then that means it is the only way – for ME. My neighbor’s path will be different, quite possibly entirely different.

I am Unitarian Universalist. We at the UU club follow seven Principles – not a creed, not a statement of beliefs. They are our operating principles, our guidelines.

Principle Number 3 calls us to affirm and promote “acceptance of one another and encouragement to spiritual growth in our congregations.” Principle Number 4 calls for “a free and responsible search for truth and meaning.” Other Principles speak of respect and inherent worth. Basically, we’re saying that even if you don’t have the same beliefs and practices as I, your path is just as viable for you as mine is for me. No conversion necessary. No coercion required. We UUers pretty much have to have principles like that; a number of different beliefs are represented within our church.

Okay, so “religious pluralism” is about acceptance and support of each other, just as we are. At United there are a number of different views represented – both between and within different denominations or world views.

That’s within this group. Now let’s go back to that neighbor we were talking about. Yes, we are open and accepting within United. What about the other next-door neighbor who is Wisconsin Synod Lutheran and believes that the Bible is the literal Word of God? That the earth was built in six days (with the seventh day for rest and for watching football)? That gays are sick people and can be saved by psychological treatment? And that if you’re not Wisconsin Synod, you’re going to hell? Are we open and accepting of that neighbor? And how exactly do we demonstrate that acceptance, when their conviction is that we’re actually going to hell?

We here are part of a liberal religious community, for the most part. How many others who self-define as Christians feel welcome in our community? Southern Baptists? Wisconsin Synod Lutherans? Catholics? Do we help them feel welcome? If they do not feel welcome, is it because of our attitudes toward them, or simply the distance from each other of our beliefs or practices?

How do we welcome those with beliefs that are not just different, but antagonistic to our own? Obviously they are not going to want to become members of this community. Even more to the point, they are going to be antagonistic to us. Do we respond with an equal measure of antagonism?

On social issues, is the LGBTQ community welcome and a part of who we are? Do we represent all colors of the rainbow? And on the topic of race and ethnicity, what about white privilege and the support of those who have suffered under it? As a pasty-white, northern European type, I have benefited from white privilege. Yet studies show that people of color continue to be discriminated against in job applications, loans and mortgages, housing… throughout society.

One school of thought says that all religions have a common basis. We’re all talking about the same God, essentially. Even Buddhism, with its lack of a Supreme Being, is talking about the same thing. Well, there’s a problem with that. Atheists, for example, would tend to disagree with it. The approach there is “humanism.” And if we try to solve the problem through theology and mysticism, the conversation can quickly become something that no one understands. For instance, Raimon Panikkar, a leading voice in “interreligious dialogue,” states:

Man and God are neither two nor one…. There are not two realities: God and man/world; but neither is there one: God or man/world…. God and man are, so to speak in close constitutive collaboration for the building up of reality, the unfolding of history, and the continuation of creation…. Cosmotheandrism is in a paradoxical fashion…. The infinity of man/world… and the finiteness of God.1

A different approach for dialogue, for interrelating, with those of other faiths, is to base it on a common problem for all religions: suffering. With this approach, it’s not so important what our belief, our theology, is; it’s far more important that we all be focused on the victims of this world and the victimization of this world. We have a common need for advocacy, for lifting up of the less fortunate. In other words: what we do is far more important than what we think. Or believe.

Who are the less fortunate? It is considered that one in nine of the population of this planet goes to bed hungry at night. If they have a bed. That’s close to 800 million people. UNICEF says that 29,000 children die from the effects of poverty. Every. Day. Half the world – more than 3 billion people – live on less than $2.50 a day. And more than 1.3 billion live in extreme poverty – on $1.25 per day.

And regarding refugees, the UNHCR (the UN Refugee Agency) says: “An unprecedented 65.6 million people around the world have been forced from home. Among them are nearly 22.5 million refugees, over half of whom are under the age of 18, who have been forced to flee their countries. There are also 10 million stateless people who have been denied a nationality and access to basic rights such as education, healthcare, employment and freedom of movement.”

We don’t currently have a “world” war. But we have “brush fires” happening all over the world. In the case of the Anuak people, genocide in South Sudan and Ethiopia. Darfur in Western Sudan. Yemen. Syria. Ukraine. North Korea. Myanmar and the genocide of the Rohingya Muslims. Mexican drug wars. Civil unrest in Honduras. Peru, and the ongoing struggle with the Shining Path guerilla group. The Middle East. Iran. Iraq. Afghanistan. There is a long list of places in this world having a variety of problems. And the problems always put a civilian population in the firing line, victims. In Syria, for instance, the current estimate is that half a million civilians have been killed in this war, with the largest percentage killed by their own government.

Where I started going with all this is to say: the commonality between religions can easily be found in ethics and practical action.

But there’s a problem here. The problem is that not all religions see these issues as a problem. Some religions are causing some of the problems. An example, of course, is the Buddhist majority population of Myanmar, which is, as I just mentioned, working to exterminate its minority Muslim population.

Don’t get me wrong. Islam and Buddhism are as a whole very caring and uplifting religions. But most religions have their radical factions, groups which believe that theirs is the only valid set of beliefs, and killing unbelievers can be a righteous act. Christianity also has these factions.

Most of us on the liberal end of the religious spectrum easily agree that these are the main issues. But there are those who strongly disagree. The more fundamentalist a religion, the harder we have to work at finding fewer and fewer points of common interest. There are churches which believe poverty and starvation are punishment for sins. These claim to be Christian churches. There are radical fundamentalists out there who are killing people in the name of their deities. We basically do not have a point of commonality with them.

So we have to step back, and rethink this whole plurality question. Do we only talk with those who agree with us in the first place? How much agreement? Since we are out there on the more liberal end of the religious spectrum, there will be a lot of issues with more differences than agreement.

But maybe that’s okay. One important lesson that Christian history can teach us is that it is not our job to persuade others to our beliefs and views. It should be our role to:

But along with these points, we also need to be prepared to speak up when those “others” are taking actions that are harming people. At our ethical base, we share a rule that, in my opinion, and many others, should be the guiding principle for all of humanity: do unto others as you would like them to do to you. The “golden rule” is shared by most of the world’s religions.

Luckily for us, those points I just listed are ones that are really familiar to us. It’s something we’ve been practicing for a long time. Or at least preaching. The idea here is that it is time for more of that practicing.

So back to the original challenge, and the title of this little monologue. How do we interact with, support, work with others who have different convictions from ours? What is our presence in the world, and how is it supporting others?

A foundation piece for us needs to be the continuing enactment of, as Sheryl Kujawa-Holbrook says, practicing hospitality. She says, “Hospitality need not be lavish or expensive, but it must come from open hearts.” Or as Tenzin Gyatso, the 14th Dalai Lama, once said, ‘My religion is kindness.’”2

Dennis Peters is a student at United and a Unitarian Universalist.

Driven by Rejection: Lessons from Mark 6:1-13