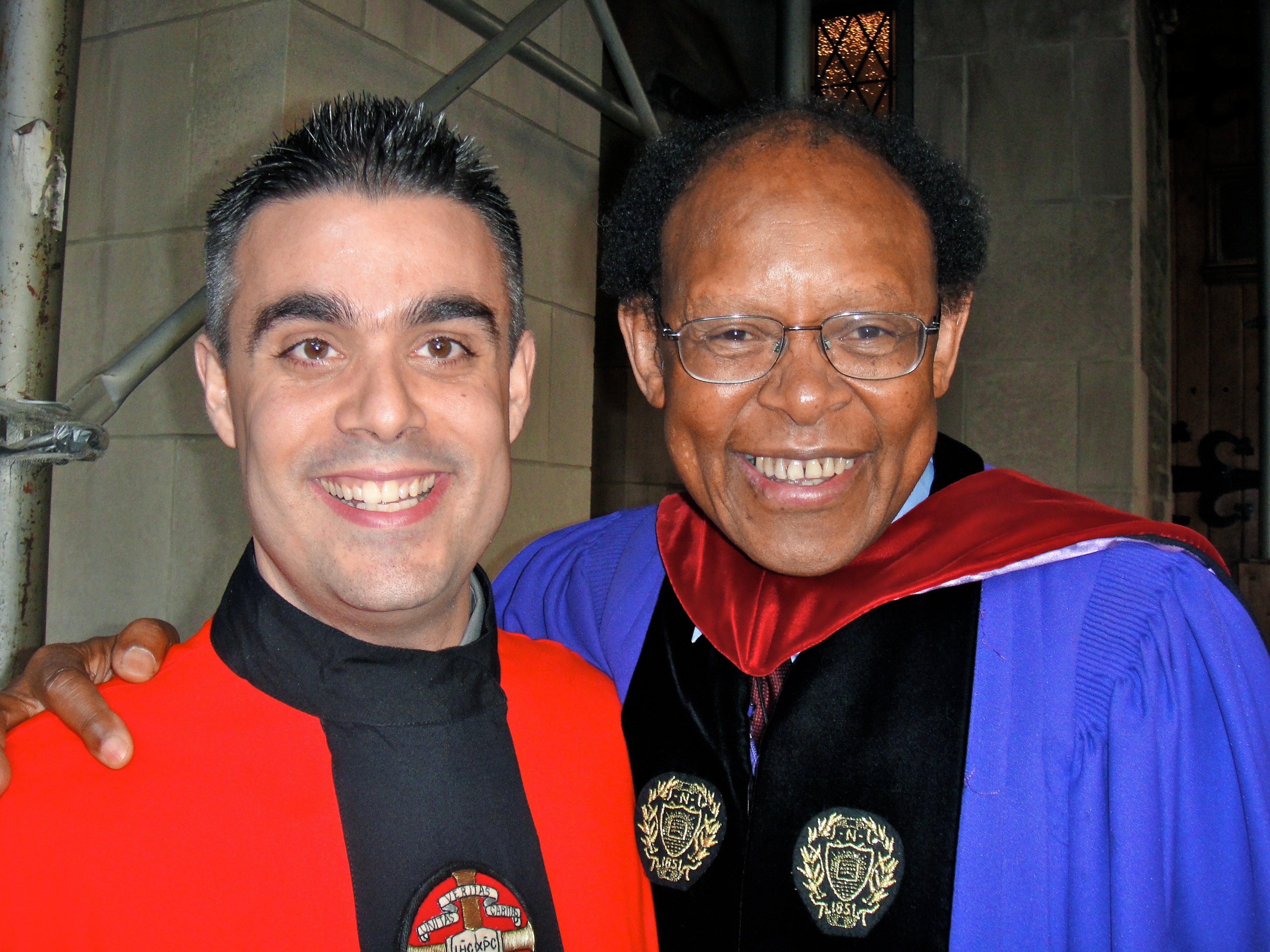 Dr. James Cone, author of A Black Theology of Liberation and numerous other publications, Charles Augustus Briggs Distinguished Professor of Systematic Theology at Union Theological Seminary, and seminal thinker in the field of black liberation theology, passed away on April 28, 2018. On Wednesday, October 3, Nkosi Anderson, former research assistant for Cone, will deliver the lecture "Finding Your Voice: James Cone and the Challenge of Black Theology" at United. United's own Dr. Demian Wheeler, who is helping to organize the lecture, earned his Ph.D. from Union, where he not only studied under Cone but served as his teaching assistant. This semester, Dr. Wheeler is also teaching a course on Black Theology that he has dedicated to the memory of Dr. Cone. Last week I interviewed Dr. Wheeler about his class, Jame Cone, and Anderson's lecture.

MBK: Anderson's lecture "Finding Your Voice: James Cone and the Challenge of Black Theology" promises to examine the legacy of James Cone's work in black theology, including its contemporary influence. How is your class, Black Theology, doing something similar?

DW: The Black Theology course examines the history of black theology beginning with its emergence and early developments in the late 1960s and early 1970s and then tracking the evolution of black theology through the 1980s, 1990s, and 2000s. Because James Cone is the chief architect of black liberation theology, much of the class will be devoted to his work. In fact, I am dedicating the class to his memory. However, we will also be reading some of Cone’s sharpest critics, from womanist theologians like Delores Williams and Monica Coleman, to second-generation black theologians like Victor Anderson and Cornel West, to African-American humanists like William R. Jones and Anthony Pinn. We will also devote a couple of weeks to the immediate historical influences on the rise of black theology: the civil rights and black power movements (led by Dr. Martin Luther King, Jr., and Malcolm X, respectively) and an earlier African-American theological tradition known as the “black social gospel” (we will be reading one of the classics of the black social gospel tradition, Howard Thurman’s Jesus and the Disinherited).

MBK: What does it mean to teach Black Theology at a predominantly white institution? How might Black Theology, as a discipline and body of work, challenge the theology that many of our students have?

DW: One question Cone frequently asked was: Why don’t white theologians and white Christians ever make racism their issue? In an interview in 2006, he lamented that most white theologians write as if slavery, colonialism, and segregation never existed. He went on to challenge white theologians and white churches to speak out in a sustained and prophetic way about racial injustice. This course is an attempt to answer Cone’s challenge. I am not saying that this one course somehow pardons us for our failure to confront white supremacy. We have a long way to go on that front. United has a long way to go on that front. This course is simply one effort, a modest and insufficient effort, to address the problem of race and racism—forcefully, seriously, and, most of all, theologically. And my hope is that this course, along with Nkosi’s lecture on October 3, will be a catalyst for a seminary-wide conversation about race.

I believe teaching Black Theology at a predominantly white institution challenges all of us—myself included—to confront the ways in which the “cancer” of racism continues to infect our churches, our seminaries, our theologies, and even our own souls. Black theology challenges all of us—myself included—to acknowledge our own complicity in the brutal and ongoing legacy of white supremacy in the United States. Black theology challenges United to make racism its issue and to renew its commitment to fighting for racial justice and beckoning—and becoming—the beloved community.

MBK: On a more personal level, you studied with James Cone. How has his teaching and his scholarship affected your own work, as a professor and as a theologian?

DW: Yes, Cone was my teacher. In fact, he is one of the best and most challenging teachers I ever had. Cone taught with passion and deep conviction, demanded academic rigor, and insisted that his students treat their studies seriously and rigorously. Cone also remains one of my greatest theological influences. I think I need to acknowledge that my own theology is much more apophatic, naturalistic, and liberal than Cone’s. For example, Cone conceives of God the liberator as an actual being, whereas I conceive of God the liberator as a powerful but humanly constructed “sacred convention” that symbolically engages ultimate reality—what Tillich called “the ground of being.” That being said, I believe Cone offers one of the most compelling interpretations of the gospel in the history of Christian theology. Cone boldly argued that Christianity is not antithetical to black power; it is black power. In my view, this claim is just as revolutionary, prophetic, germane, and vital in 2019 as it was in 1969.

I have also been deeply affected by Cone’s insistence that all theology is contextual and historical. For Cone, theology is not universal language about God, but human and historically conditioned language about God. In other words, it is defined by the cultural situation that gives birth to it and the time and place in which it was written. I call this Cone’s “historicism.” My forthcoming book is about the challenge that historicism poses to modern theology!

Cone’s historicism shaped the way he taught theology. His primary concern as a teacher was to help his students find their own theological voice and discover what is ultimately at stake for them in studying and doing theology. This had a profound effect on me as a student and is something I have tried to carry over into my own teaching.

In actuality, black theology, and liberation theology more generally, is accountable to multiple publics, to use David Tracy’s language; it is accountable to the church and the academy and the larger society. This has enabled black theology to become a fairly effective form of public theology—at least relative to other theologies on the contemporary scene.

DW: I am excited about a lot of things! I am excited to delve into the black social gospel tradition—which is a relatively new interest for me. I am excited about exploring black humanism, a small, but robust, trajectory within African-American religious thought that offers a nontheistic variant of black theology. I am also excited to read and discuss Cone’s autobiography, Said I Wasn’t Gonna Tell Nobody, which is coming out in October. We will probably be one of the first seminary classes in the country to read and discuss this book.

There are many other things I’m looking forward to as well. Later this month, our class will travel to the Penumbra Theatre to see For Colored Girls: Who Have Considered Suicide/When the Rainbow is Enuf (special thanks to Cindi Beth Johnson for arranging this trip). We will also hear from five guest speakers over the semester: Karen Hutt, Dee McIntosh, Marvin Wickware, Alika Galloway, and Nkosi Anderson. So, there's lots to be excited about!

Convocation 2018: "As we elevate what is holy, may we be transformed."