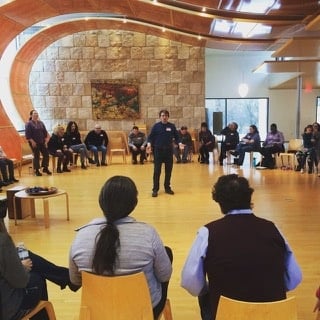 If you happened to be walking down the halls of United on Saturday, January 21st, you probably heard a lot of singing. That's because more than 40 people from around the Twin Cities and across the upper Midwest gathered for a day-long interfaith "Music That Makes Community" workshop. Facilitated by director Paul Vasile and local musician Conie Borchardt, the event explored the practice of teaching paperless singing. The group learned new skills for leading community songs to enrich their communities' worship life, and reflected on strategies for cultivating participatory singing and liturgy.

"In paperless singing, people are freed from being tied to a resource," said Tom Witt, Music Coordinator at United Theological Seminary of the Twin Cities and one of the organizers for the event. "They don't have to look down at their paper or even up at a screen. It consists of shorter songs, call and response, echo, rounds, and parts. It frees people up to just sing."

In a moment of social upheaval, Tom said that this kind of communal worship can connect people to each other and God. "This is a theology of song leading that's horizontal and gracious. Much of contemporary Christian music is centered around 'performances.' But the point of Music that Makes Community is that everyone has a voice."

United's seminary chaplain, John Lee, who also participated in the event, agreed. "Musicians are trained to be precise--to know the notes and the changes and not to screw it up. But instead of being about precision, this form of singing is about expression. It's about being free and finding yourself in the story of the song. And that's liberating." 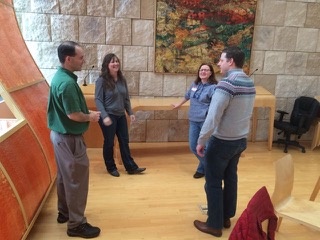 John added that the practice of singing communally helps people take their theology from a cognitive exercise to an embodied way of being in the world. "A lot of the time, we're focused on the left brain--our linear and logical constructs. That's vital, but the next bridge is embodied theology. How does our theology tap into the ultimate concern of what it means to be human or to say that God is present? This practice allows us to be free of the notes, to feel them, to live into the uncertainty."

Tom and John both said that they hope to do a follow-up, three-day workshop in the coming months--and perhaps even develop a local practice group, where participants can teach each other new songs, grow their skills as song leaders, and even devise new pieces of music in community.

"This is what first century churches were doing for a long time," John said. "Luther did it, Wesley did it. There is something powerful in placing our own words, expressions, and theology into music."

Below, watch one of the songs from the Music Makes Community workshop hosted at United on January 21.

Explore Theology and the Arts This Spring

How to Make Writing a Meaningful Spiritual Practice